Up to 25A of phase-to-phase current, and up to 20bits of angular precision are provided. The electronic units feature a microprocessor chip, a set of absolute encoder interfaces for shaft position measurements, a firmware implementation of advanced motion control algorithms that operate in a closed loop fashion, as well as CANbus/CANopen and USB 2.0 interfaces for receiving commands from a control computer/PLC and sending back telemetry.

The controllers are extensively used in various products of Servosila including its lines of robotic arms, and servo drives. The controllers’ design incorporate multiple lessons learned by Servosila while operating its robots in various environments.

Up to 25A of phase-to-phase current, and up to 20bits of angular precision are provided. The electronic units feature a microprocessor chip, a set of absolute encoder interfaces for shaft position measurements, a firmware implementation of advanced motion control algorithms that operate in a closed loop fashion, as well as CAN/CANopen and USB 2.0 interfaces for receiving commands from a control computer/PLC and sending back telemetry.

The controllers are extensively used in various products of Servosila including its lines of robotic arms, and servo drives. The controllers’ design incorporate multiple lessons learned by Servosila while operating its robots in various environments.

SERVOSILA SC-25 controllers come in two distinct forms, a rectangular one (SC-25R) and a circular one (SC-25C). Both models are identical in terms of capabilities, features, firmware, and external electrical connectors. Industrial designers might prefer one model over the other depending on what actuated mechanisms they are working on. At the same time, both electrical and software engineers rest assured that whichever model is chosen for a particular design, a full electrical and software compatibility is still in place.

The controllers support the following kinds of electric motors:
– Brushless DC motors (PMSM, BLDC) of any manufacturer,
– … Sensored or Sensorless,
– …with or without absolute shaft encoders,
– …with or without a gearbox,
– …with sinusoidal or trapezoidal control,
– as well as Brushed DC Motors (up to 2 brushed motors can be connected to a single
controller at the same time), and Solenoids.

External absolute position encoders (optional) enable such functions as servo control, robust speed control at low speeds, a brake function, and various safety functions. If an electric drive does not have an encoder, the controllers are capable of operating using Hall sensors, or in an open loop position control mode similar to step motors.

A Sensorless control mode is available for controlling brushless motors that do not have built-in Hall Sensors or attached encoders.

The controllers come with pre-soldered connectors (Molex & TE Connectivity) for attaching phase lines, power lines, sensors, encoders, and information buses. Besides the connectors, the electronic units come with soldering holes for every signal or power line; the holes allow cables to be soldered directly to the boards to form vibration-resistant connections.

The SERVOSILA controllers feature two CAN bus ports (parallel). This simplifies cabling of multiple controllers into a chain, for example, inside a robotic arm manipulator or a robotic chassis, and streamlines in-the-field repair or replacement process.

All controllers have an on-board terminal 120 Ohm resistor prescribed by the CAN standard. The resistor can be turned on or off via a jumper. Only one controller in a chain needs to have the terminal resistor enabled.

There is a way to upgrade the controllers’ firmware via a RS232 port, including field firmware upgrades of servo drives or mobile vehicles.

Operation Modes & Capabilities
SERVOSILA SC-25 Brushless Motor Controllers are capable of controlling motors in several different ways called “modes”. The controllers switch from one mode to another upon receiving commands sent via CANbus or USB 2.0 by a control computer/PLC.

1. “Torque Control”. In this mode, the system tightly controls a prescribed torque with which a brushless motor actuates its payload. This mode would typically be employed whenever what matters is torque rather than speed of the motor, for example, in a test/diagnostics equipment, or in a highly dynamic walking robot application.

2. “Electronic Speed Control (ESC)”. In this mode, the SERVOSILA controllers maintain a constant commanded speed of rotation of the motors’ shafts under an influence of varying external forces. The controllers automatically increase or decrease torque in response to perturbations of external loads thus keeping the speed of the drive constant.
This mode is often used when actuating pumps, conveyor belts, thrust drives, mobile chassis, and in many other applications.

3. “Servo Control”. In this mode, the controller turns a brushless motor into a servo motor capable of holding a commanded position (with or without a gearbox). Upon receiving a servo command, the controller first moves the drive’s output shaft to a specific commanded position (angle), and then holds the position under an influence of external forces that try to disturb the balance. An encoder is required in this mode to measure absolute position of the drive’s output shaft. The encoder can be connected to the controller via one of available encoder interfaces (BISS-C, SSI, SPI, PWM, Quadrature). Up to 20bit of angular precision is supported. The servo control mode is widely used in
applications ranging from servo drives of robotic arm manipulators, to CNC machines, to robotic warehouse systems.

4. “Direct Drive”. In this mode the controller directly positions magnetic fields inside a brushless motor, and achieves the highest possible precision of positioning accuracy. This mode is often used with electric drives that do not have a gearbox (thus the name). Typical applications include computer vision systems, CNC machines, linear motor actuators, – all those applications where use of a gearbox is avoided to minimize backlash-related issues that affect positioning accuracy. A brushless motor operated in a direct drive mode is much better than a more traditional stepper motor.

5. “Brake”. The controllers implement an energy-efficient “parking brake” mechanism that blocks motor’s motion. This is achieved without a need for an external braking mechanism. In this mode the controller monitors position of a brushless motor’s rotor using either Hall sensors or an encoder, and makes energy-efficient adjustments to the
magnetic field inside the motor in such a way that rotation of the output shaft is blocked. The built-in braking mechanism comes handy in applications where motion may need to be stopped and then put on a brake, – such as a conveyor belt or a mobile chassis. Imagine a mobile robot that has to stop while climbing stairs and then use a payload while staying in the inclined position for an extended period of time. The “parking brake” mode efficiently keeps the wheels of such a robot on a brake without wasting too much energy on doing so.

6. “Energy Recuperation”. The controllers are capable of controlling (regulating) a flow of electrical current back to a battery whenever a brushless motor becomes an electric generator due to an external force causing rotation of the motor’s rotor. This feature enables the controllers to be used in starter-generator applications when coupled to
internal combustion engines, or might help extend the range or endurance of a mobile vehicle through recuperation of its braking energy. The batteries might need to be equipped with additional electronics to be able to safely accept the reverse flow of electrical current.

The firmware of SERVOSILA controllers implements sophisticated brushless motor control
algorithms:
• Field-Oriented Control (FOC),
• … with Back-EMF Observer and Hall Sensors Observer,
• … with D-Q Coupling Compensation for smooth operation,
• … with software-controllable Field Weakening for reaching speeds beyond the motor’s
nominal speed,
• … with safety features based on many lessons learned,
• … with intelligent controls of the drive’s dynamic characteristics,
• … and automatic system identification of motor’s parameters.

The algorithms ensure a low-noise operation of brushless motors while increasing available torque, minimizing power consumption, and reducing risks of overheating the motor, breaking a gearbox, or causing an injury.

The SERVOSILA controllers provide for a limited control of brushed motors (vs. brushless ones) and solenoids. Brushed motors can only be controlled in an open loop mode. It is possible to control up to 2 brushed motors or solenoids at the same time (vs. a single brushless motor).

System Identification
The controllers feature an automated system identification capability that dramatically simplifies commissioning of new motors. The controllers are capable of automatically detecting phase-tophase resistances and inductances of the motors as well as other key characteristics of electric drives. The measured parameters are then used to automatically configure various control laws and regulators within the firmware. This feature speeds up commissioning of new motors and improves the quality of motor control even if the motor’s data sheet is lost for any reason.

CANbus/CANopen and USB 2.0 interfaces, programming APIs
The SERVOSILA controllers provide an open CANopen control interface, and an open USB 2.0 interface, a virtual COM port, for receiving commands from a control computer/PLC as well as for sending telemetry back.

Many off-the-shelf software products such as LabView support SocketCAN API out of the box, and come with an integrated CANopen stack. If the path taken is to develop the control software from scratch, there are many samples of open source programs available on the Internet that make use of Linux SocketCAN API.

In addition, most Linux distributions come with a special SLCANd daemon which makes SERVOSILA controllers attached via USB Virtual COM ports appear as CANbus devices or as USB2CAN dongles. This daemon makes it possible to use the same Linux SocketCAN API whenever the SERVOSILA controllers are connected to Linux via USB 2.0 or a CANbus interface (does not matter which one, the API is still SocketCAN API).

As Windows 10/8 systems do not have such a unified CANbus API, the ways for a control system’s software running on Windows to interact with SERVOSILA controllers include:

• either through a virtual COM-port (USB 2.0) by writing to and reading from the port using a standard text protocol called SLCAN which is based on exchange of text strings formatted according to fairly simple open specification,

In general, user software for a control computer/PLC can be developed in any language that supports either Linux SocketCAN API or read/write operations for virtual COM ports on Windows 10/8 or Linux. This includes C/C++, Qt, Java, Python, MATLAB, LabView, and many other languages and packages.

The application runs on Windows 10/8 or Linux including the popular distributions of Debian and Linux. No drivers need to be installed on either of the platforms to run the tool. The tool connects to SERVOSILA controllers via CAN bus or USB interfaces.

Electric Drive Simulator
The Servoscope application comes with a built-in software simulator of electric drives. In a real time way, the simulator numerically solves differential equations that define the dynamics of brushless motors, and provides a simulated CANbus/CANopen interface via Linux SocketCAN API for user control software being tested to connect to. The interface of the software simulator exactly matches the interface of a real SERVOSILA controller coupled with a real electric drive.

The simulator allows debugging of user software via CANbus/CANopen protocol prior to procuring a real hardware. Even if the hardware is available, it is still wise to first test your code against a simulator to avoid risking to burn a motor, break a gearbox, or cause an injury.

The simulator allows modeling the behavior of brushless motors or control systems under various conditions including dangerous or critical ones. The simulator is one of the software tools packaged into Servoscope application. 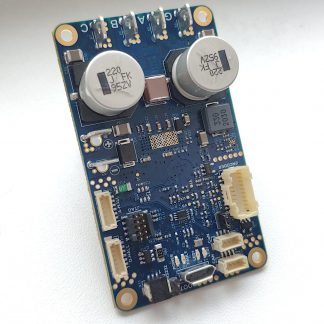